 The research group in this study developed the world's thinnest and lightest signal amplifier for bioinstrumentation and demonstrated high-precision monitoring of electrocardiac signals with reduced noise levels.

 A thin and flexible organic differential amplifier that can precisely monitor weak biosignals without the user feeling any discomfort caused by the device attached to the bodies was realized.

 Easy and high-precision bioinstrumentation was achieved by adding functions for reducing disturbance noise, such as noise caused by walking.

 Using the developed differential amplifier, the creation of new valuable applications, such as advanced bioinstrumentation at home, is anticipated.

A research group led by Professor Tsuyoshi Sekitani and Associate Professor Takafumi Uemura of The Institute of Scientific and Industrial Research, Osaka University, succeeded in developing the world's thinnest and lightest differential amplifier for bioinstrumentation.

Conventionally, bioinstrumentation circuits for health care and medical use have consisted of hard electronic devices, such as silicon transistors. However, when soft biological tissues, such as skin, come into contact with hard electronic devices, they tend to become inflamed. Therefore, monitoring of biosignals in everyday life over a long period of time proved difficult. The research group developed a flexible bioinstrumentation circuit that eliminates the discomfort caused by the device attached to the body of the user by integrating flexible electronic devices called organic transistors (*1) on a thin and flexible plastic film with a thickness of 1 μm (1 μm is 1 one-millionth of 1 m). The developed circuit is a signal-processing circuit called a differential amplifier (*2).

Compared with conventional single-ended amplifiers (*3), the flexible differential amplifier developed in this study can not only amplify very weak biopotential but also reduce disturbance noise (*4). This group demonstrated that the differential amplifier can be applied to human instrumentation and realize real-time monitoring of electrocardiac signals, which are important biosignals, with reduced noise levels.

This achievement is expected to lead to the monitoring of various weak biosignals (e.g. brain waves and cardiac sounds of a fetus) in everyday life in addition to electrocardiac signals without subjecting users to the discomfort caused by devices attached to the body.

In Japan, with its declining birthrate and aging population, the application of flexible electronics such as organic transistors in the medical and health care fields has been actively promoted. Sensors and electronic circuits with a high compatibility with biological tissues such as skin and organs are realized by using soft organic materials.

Among these sensors and electronic circuits, flexible amplifiers with organic transistors integrated into them eliminate the discomfort felt by users caused by the devices attached to the body. The research and development of such amplifiers as sensors to continuously monitor very weak biosignals is currently ongoing. However, conventional organic amplifiers mainly have a single-ended structure that cannot distinguish the target biosignals from disturbance noise, making it difficult to monitor biosignals with a low noise level (Fig. 1). A differential amplifier is a circuit that can measure signals with the noise components removed. However, the variation in the quality of manufactured organic transistors is large compared with that of silicon transistors; thus, there have been no reports on flexible differential amplifiers that realize precise noise reduction.

The research group succeeded in developing a flexible organic differential amplifier with a noise reduction function by developing a compensation technique that can reduce the dispersion of current flowing in organic transistors inside the amplifier to as small as 2% or less. The amplifier was fabricated on a parylene film with a thickness of 1 μm. The amplifier does not break when the film is bent and can be attached to human skin without causing any discomfort (Fig. 2). Electrocardiac signals were amplified 25-fold and the noise was reduced to one-seventh or less by using this flexible differential amplifier for monitoring the signals. The group demonstrated that the noise caused by external power sources as well as large body-motion noise caused by walking are removed during the monitoring of electrocardiac signals (Fig. 1).

Smart watches and other wearable devices for monitoring biosignals, such as electrocardiac signals, in everyday life are already on the market. Bioinstrumentation is expected to become easier and more comfortable in various situations through the use of the high-precision flexible bioinstrumentation circuits without subjecting users to any discomfort caused by the devices attached to their body. For example, bioinstrumentation of people who are performing physically strenuous exercise, such as during sports, becomes possible owing to the improved wearability and adhesion between the device and skin. The real-time long-time bioinstrumentation data thus obtained will promote early detection of diseases and improve the efficiency of treatment, monitoring of the elderly and patients, and monitoring of exercise load. These achievements will further lead to the solution of various problems in Japan's aging society by way of reduced medical expenses and improved quality of life (QOL).

Organic transistors are transistors in which the current-conducting semiconductor part consists of an organic material. Unlike inorganic semiconductors, most organic semiconductors are fabricated at a low temperature of 200 oC or lower. Therefore, thin plastic films can be used as the substrate, enabling the fabrication of light and flexible transistors. By combining and integrating several transistors of this type, the research group realized electronic circuits capable of signal amplification and noise reduction.

Monitored biosignals are contaminated by disturbance noise comprising commercial AC noise (hum noise) and body-motion noise. Commercial AC noise is generated by surrounding power sources; it has a constant frequency of 60 and 50 Hz in western and eastern Japan, respectively. Body-motion noise is caused by the disagreement between electrodes and wiring associated with body motion. Therefore, the development of flexible electrodes and measuring circuits that can come into close contact with the skin is important for achieving high-precision bioinstrumentation. 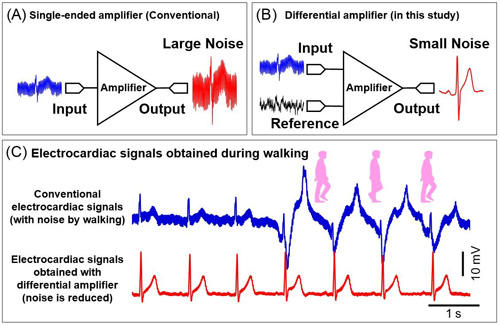 (B) Differential amplifier developed in this study

The organic differential amplifier is extremely lightweight and thin and can be attached onto soft skin without causing any discomfort to the user. Bioinstrumentation in everyday life is expected to become simpler and more comfortable to use.