2019.10.16
A close up on the real world -- atomic migration under ambient conditions

Increasing our understanding of how individual atoms and molecules participate in chemical reactions is critical to the development of new technologies. However, to date it has not been possible to image atomic dynamics on metal surfaces under conditions that are similar to those of the industrial processes of interest. Now, researchers from Osaka University have used in situ environmental transmission electron microscopy to visualize progressive atomic dynamics in real life-like environments. This significant achievement has implications for materials such as quantum dots--fluorescent materials used in LEDs, solar cells, and medical imaging--and nanocatalysts that are used to increase the efficiency of industrial processes. Their findings were published in Angewandte Chemie International Edition.

Many nanoparticle catalysts and nanodevices rely on the migration of atoms from one state to another when they are triggered by an electronic stimulus such as an intense light. Experiments that have sought to understand these processes have generally been conducted under conditions that do not replicate the time scales or atmospheric compositions relevant to actual applications. For example, many surface experiments such as traditional transmission electron microscopy are carried out under vacuum and thus limit the applicability of the findings.

In this latest study, the researchers report an in situ environmental transmission electron microscopy technique that allows changes in the atomic dynamics of a metal surface in a strong electric field to be visualized directly over time and under ambient conditions. In particular, the physical changes resulting from the oxidation of a gold electrode by oxygen atoms were tracked as the reaction progressed.

"We applied an electric field across a very small gap between gold electrodes, which activated the oxygen gas molecules present in the atmosphere by extremely fast electron tunneling," study lead author Ryotaro Aso explains. "This in turn led to progressive changes at the surface of the gold electrodes--generally thought of as inactive--that we were able to clearly capture in images."

This is the first reported direct visualization of progressive atomic changes of a metal surface in an electrostatic field under ambient conditions and has been termed a tunneling-electron-attached-gas process.

"We expect both the gold electrode system we investigated and our environmental transmission electron microscopy approach to provide new perspectives for materials science researchers," study lead author Ryotaro Aso explains. "We hope that the tunneling-electron-attached-gas process demonstrated will lead to developments in nanocatalysts and quantum nanodots and allow for tailored syntheses of new nanomaterials." Such nanomaterials could have far-reaching applications in displays, imaging, and chemical production. 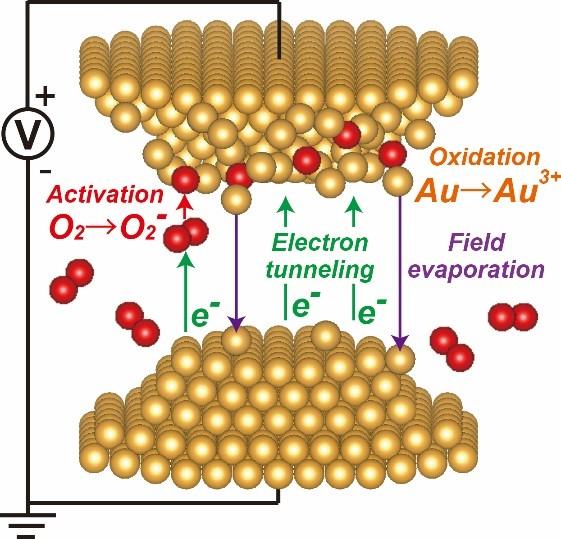 The article, "Visualizing Progressive Atomic Change in the Metal Surface Structure Made by Ultrafast Electronic Interactions in an Ambient Environment" was published in Angewandte Chemie International Edition at DOI: https://doi.org/10.1002/anie.201907679.

Department of Nanocharacterization for Nanostructures and Functions, Nanoscience and Nanotechnology Center, The Institute of Scientific and Industrial Research, Osaka University