2020.03.18
How do you power billions of sensors? By converting waste heat into electricity

Interconnected healthcare and many other future applications will require internet connectivity between billions of sensors. The devices that will enable these applications must be small, flexible, reliable, and environmentally sustainable. Researchers must develop new tools beyond batteries to power these devices, because continually replacing batteries is difficult and expensive.

In a study published in Advanced Materials Technologies, researchers from Osaka University have revealed how the thermoelectric effect, or converting temperature differences into electricity, can be optimally used to power small, flexible devices. Their study has shown why thermoelectric device performance to date has not yet reached its full potential.

Thermoelectric power generators have many advantages. For example, they are self-sustaining and self-powered, have no moving parts, and are stable and reliable. Solar power and vibrational power do not have all of these advantages. Aviation and many other industries use the thermoelectric effect. However, applications to thin, flexible displays are in their infancy.

Many researchers have optimized device performance solely from the standpoint of the thermoelectric materials themselves. "Our approach is to also study the electrical contact, or the switch that turns the device on and off," explains Tohru Sugahara, corresponding author of the study. "The efficiency of any device critically depends on the contact resistance."

In their study, the researchers used advanced engineering to make a bismuth telluride semiconductor on a 0.4-gram, 100-square-millimeter flexible, thin polymer film. This device weighs less than a paperclip, and is smaller than the size of an adult fingernail. The researchers obtained a maximum output power density of 185 milliwatts per square centimeter. "The output power meets standard specifications for portable and wearable sensors," says Sugahara.

However, approximately 40% of the possible output power from the device was lost because of contact resistance. In the words of Sugahara: "Clearly, researchers should focus on improving the thermal and electrical contact resistance to improve power output even further."

Japan's Society 5.0 initiative, aimed at helping everyone live and work together, proposes that the entirety of society will become digitalized. Such a future requires efficient ways to interconnect our devices. Technological insights, such as those by Ekubaru, co-lead author, and Sugahara, are necessary to make this dream a reality. 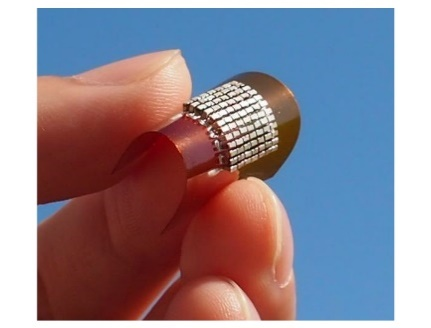 Movie 1: These thermoelectric semiconductor chips have been constructed in a precisely and accurately refined process via high-precision chip mounter.

Movie 2: The compact and ultra-lightweight flexible thermoelectric device is shown fluttering in the wind and being bent by hand.

The article, "Fabrication and characterization of ultra-lightweight, compact, and flexible thermoelectric device based on highly refined chip mounting" was published in Advanced Materials Technologies at DOI: https://doi.org/10.1002/admt.201901128.