2021.02.10
From trash to treasure: silicon waste finds new use in Li-ion batteries

Li-ion batteries (LIBs) are widely used in various mobile electronics. Concerns of global warming and climate change have recently boosted the demand for LIBs in electric vehicles and solar photovoltaic output smoothing. Si has been studied as an active material with a high theoretical capacity of 3578 mAh/g, which is around ten times higher than that of graphite (372 mAh/g).

Generally treated as industrial waste, Si swarf is generated at a rate of 100,000 tons per year globally from Si ingots that are produced from silica through processes at 1000~1800°C. Water-based coolants and fixed abrasive grain wire saws are paving the way to the use of Si swarf as an anode active material with a high capacity at a reduced cost.

Nano carbon materials have been applied to Si electrodes to improve electrical conductivity and cyclability. Many strategies for dealing with large volume change of Si electrodes at relatively high costs have been demonstrated. However, the Si electrodes do not combine all the requirements for high electrode performance, namely reduced cost, environmental friendliness of materials and processes, and circular economy.

The Si/GS composite structure and the delithiation limitation improve the cyclability up to 901 cycles at 1200 mAh/g. The areal delithiation capacity and current density of the Si/GS electrodes linearly increase to 4 mAh/cm2 and 5 mA/cm2, respectively, with the mass loading for more than 75 cycles (Fig. 3), while thick electrodes with C-coated Si fabricated in C2H4 are not competitive.

"Si anode batteries with high capacity and high current density have the potential to be used in electric vehicles. This potential, combined with increasing generation of Si swarf as industrial waste, will allow our work to contribute to reduced greenhouse gas emissions and the achievement of SDGs," says corresponding author Taketoshi Matsumoto. 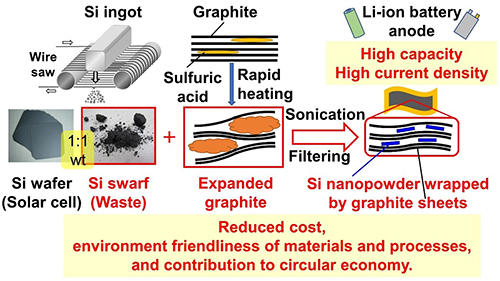 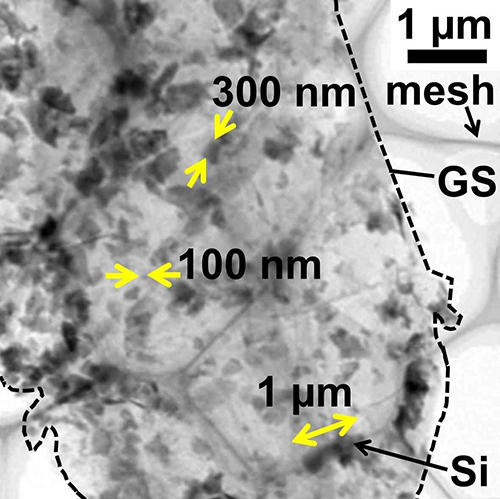 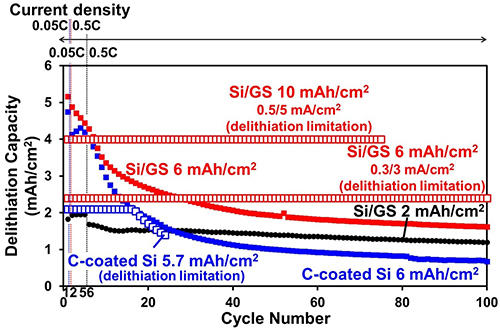 The article, "Si swarf wrapped by graphite sheets for Li-ion battery electrodes with improved overvoltage and cyclability," was published in Journal of The Electrochemical Society at DOI: https://doi.org/10.1149/1945-7111/abdd7e.